The Next Elvis by Barbara Barnes Sims now on sale at Audible! 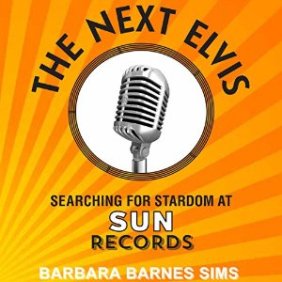 Lee Ann is pleased to announce the newest addition to her recordings. The Next Elvis: Searching for Stardom at Sun Records by Barbara Barnes Sims is a nonfiction account of what it was like for a young woman in the 1950’s to work at Sun Studio in Memphis.

“An American institution, Sun Records has a history with many chapters: its Memphis origins with visionary Sam Phillips, the breakthrough recordings of Elvis Presley, and the studio’s immense influence on the sound of popular music. But behind the company’s chart toppers and legendary musicians there exists another story, told by Barbara Barnes Sims. In the male-dominated workforce of the 1950s, 24-year-old Sims found herself thriving in the demanding roles of publicist and sales promotion coordinator at Sun Records. Sims’s job placed her in the studio with Johnny Cash, Roy Orbison, Jerry Lee Lewis, Charlie Rich, Carl Perkins, and other Sun entertainers, as well as the unforgettable Phillips, whose work made the music that defined an era. Her disarming narrative ranges from descriptions of a disgraced Jerry Lee Lewis to the remarkable impact and tragic fall of DJ Daddy-O Dewey to the frenzied Memphis homecoming of Elvis after his military service. Collectively, these vignettes offer a rare and intimate look at the people, the city, and the studio that permanently shifted the trajectory of rock ‘n’ roll.”

To listen to a sample and/or purchase, you can find the book on Audible here.